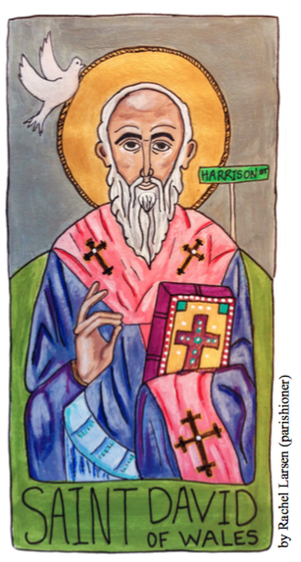 Our History: The Whole Story

1865 -  Saint David of Wales Episcopal Church is the first recorded Episcopal service on Portland’s east side, then known as East Portland. As the 9th oldest church in the diocese it is the the first mission on the east side of the Willamette River.

1870 -  Property at the corner of East Morrison and Grand Avenue is secured as the site for the new church. A gift of $1,000 from a donor was provided for the building of a new church, with the provison that the church be named St. David of Wales after the donor’s parish in Pennsylvania. The cornerstone for the new church was laid on August 17, 1870.

1891 -  The first church located on Grand and Morrison is moved to 12th and Belmont. Although construction on the second church starts immediately, it is suspended for nine years because of lack of funding. On January 4, 1903, the second St. David’s, built of stone, is completed and occupied.

1952 - The third and current church is completed. The congregation is bustling with three services each Sunday, and “something every night”.

2007 - The once vibrant parish sees a smaller and smaller congregation on Sundays. Longtime parishioners say the empty pews resulted from a combination of old age, shifting demographics, frustration and divisions over the ordination of women and gays, and a controversial rector or two. The part-time priest, nearing the mandatory retirement age of 72, does his best to keep the doors open, but worries that if he left, the diocese would sell the building.

2008 - After reading an article about St. David’s struggles, neighbor and Reverend Sara Fischer speaks with diocese leaders about her dreams for the church and asks then current rector Rev. John Nesbitt, about his plans for its future. Together, they organize two neighborhood meetings to find out what people wanted from the church. The overall response is “community.”

Late 2008 - Rev. Nesbitt retires, and Rev. Sara Fischer is named to replace him. She steps into her new role as rector with two basic themes, which become core principles to the identity as a faith community: a promise to develop strong ties between the church and the surrounding neighborhood and a plan to develop a wide variety of worship experiences.

2014 -  With joy and sadness, the congregation says good bye to Sara Fischer. All wish her the best in her continuing work to serve God in the Pacific Northwest.

2015 - The Vestry works together with Bishop Hanley and Canon Neysa towards the selection of an interim leader. James Joiner accepts the call to serve as Interim Rector. Following a unanimous decision by the Search Committee and the unanimous approval of the Vestry, Saint David of Wales announces the appointment of new rector the Rev. Kerlin Richter.

2020 -  As a result of the global COVID-19 pandemic, Saint David of Wales pivots to Zoom Church in March for what they expect to be a few weeks. The church will not hold in-person services within the building for more than 18 months.